How This Microverse Alumni Landed His International Dream Job 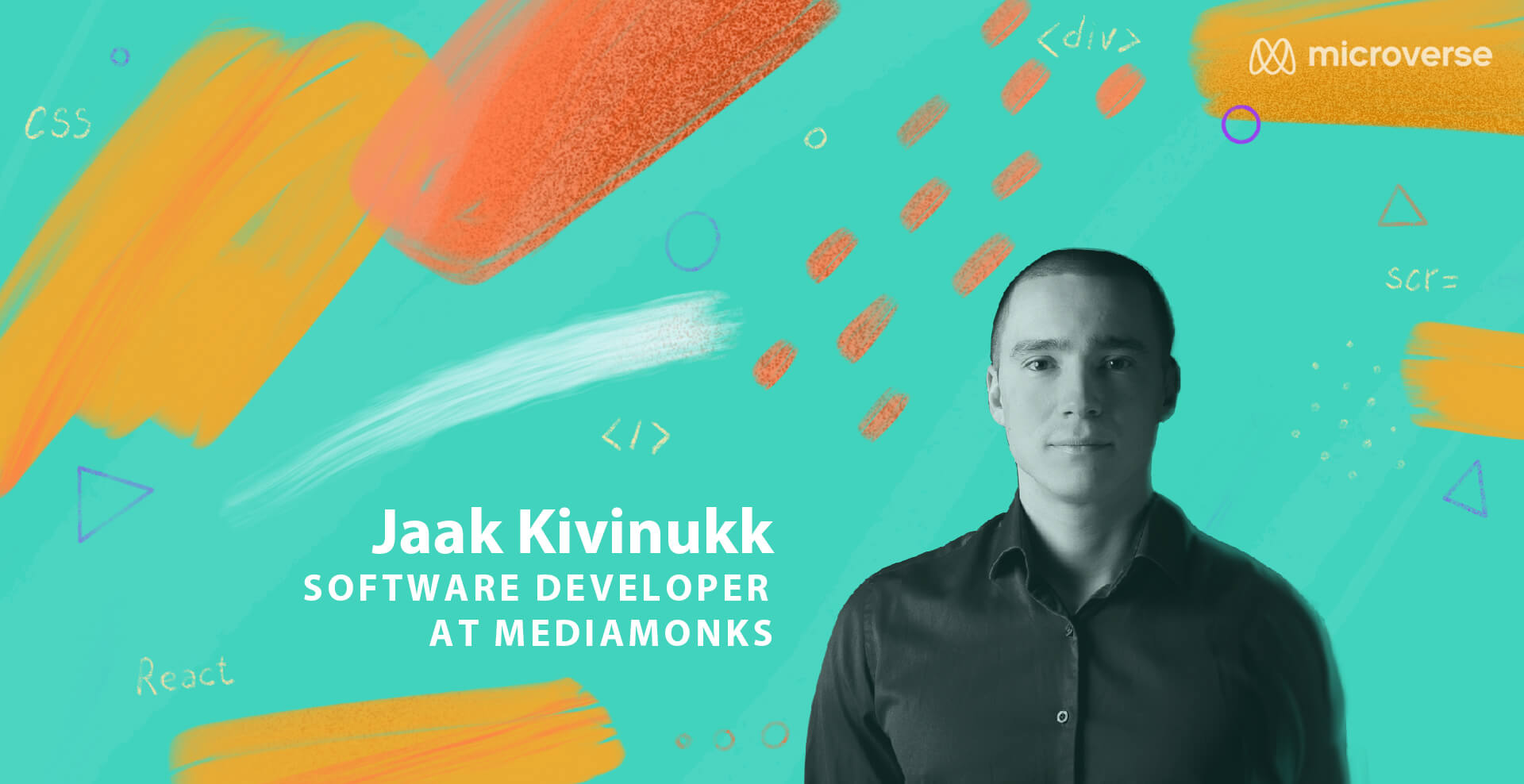 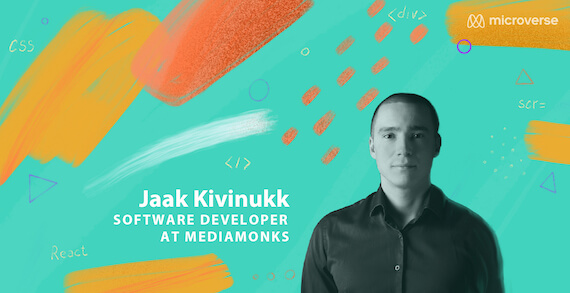 “I always knew that if I’m willing to put a lot of work in, I have the potential to be a programmer or a software developer. But what Microverse gives you is the full package from start to finish.” - Jaak Kivinukk

Becoming a professional software developer takes hard work and dedication. Microverse students work incredibly hard to do just that and we’re so proud of all our students and the work they put in. From making sacrifices to be able to support themselves throughout the program, to spending thousands of hours learning, they’re committed to improving their lives. Our alumni have landed jobs around the world, earning more than what they made before — without paying Microverse anything until they’re employed.

We are delighted to highlight another alumni, who managed to build himself a career in web development. Jaak Kivinukk is from Estonia but is currently based in the Netherlands where he works for MediaMonks, a creative digital production company that produces websites, games, and films. We asked Jaak about his journey learning with Microverse, his job search, and his experience working at MediaMonks.

Building a Dream From His Love of Math

Jaak’s initial career goal was to become a lawyer although he was more skilled in mathematics and physics. Realizing law wasn’t the career path he’d excel in, he started looking for careers he could excel in. A career in computer programming first interested him because of the salaries and career potential.

“If you’re not a coder before, you’ll think it’s math. But later, you’re going to understand that’s not the case. It depends what type of programming you’re going to do in the future.”

When Jaak started university, he chose to get a degree in informatics. But halfway through his bachelor’s degree, he had to quit college due to personal reasons. He then moved to Finland for work and attempted to do long distance learning to replace his education. That didn’t feel like the best fit for him though.

Finding a job wasn’t too difficult for Jaak as many companies value skill more than an actual degree.  He had a job in Finland as a renderer, so he decided to stop his long-distance education and focus on work full time. This was Jaaks main profession, until he joined Microverse in 2019.‍

When Jaak first discovered Microverse, he’d been searching for coding courses and bootcamps for years.  He hadn’t found any options that were a good fit or available to him. Most were based in the US or other parts of Europe and required him to be physically present. Upon learning more about Microverse, Jaak said he ‘didn’t believe it at first’. As he thought more about it though he realized how the program made sense and would be a great fit for him.

Jaak took the chance and began his Microverse journey at the end of 2019. It was a road full of ups and downs. It was the first time Jaak was learning again after 10 years, so he needed to adjust to learning new things everyday.‍

The Best Lessons From Microverse

Before starting Microverse, Jaak thought programming was a solo job. “You’re behind the computer, you’re doing it alone but you don’t have any real experience. It first scared me.”

After his first experiences pair programming at Microverse, Jaak felt he’d opened up a world of exciting opportunities. “If you don’t have previous experience working with other people, you don’t know that it can be great,” he advised.

He also noted that his stand-up team was very supportive and had great teamwork. They utilized their meetings to the full potential, and would talk for hours to motivate and help each other. The frequent communication helped Jaak with the soft skills, besides the professional skills, necessary for work.

In the early days of 2021, Jaak sent out 120 job applications to various companies. Out of all the applications he sent, a quarter of them responded to his application and he moved forward with 10 of them.

When applying Jaak said he was thinking,

“Even if I don’t get excited about my first opportunity, it doesn’t matter. I’m just going to go in full force, try to get the first six months in, a year in. Then, I’m going to start looking for a better place when I’m not a junior developer.”

His current employer, MediaMonks was among the companies he applied to. MediaMonks responded and gave him a trial project to work on. The project interested Jaak and he enjoyed working on it.

Despite this, he felt some imposter syndrome as he thought he wouldn’t be able to get a job at a company of their size. When he sent in the project, Jaak also included in the email that they were exactly the company he wanted to work in.

Jaak was determined to get a role at MediaMonks, even if it meant he had to work without pay. “In the first email, when I submitted my test project, I mentioned that I’m willing to work without salary as an intern.” It was a big gamble since telling companies you’re willing to work for free could enable them to take advantage of you. Fortunately, the company invited Jaak to work for them with a salary.

Relocating for His New Role

Part of accepting the job offer was that Jaak had to relocate to the Netherlands.  MediaMonks was helpful with the transition and provided him with a company apartment which he was grateful for. “It feels good because when you’re working in construction, you’re not valued as much as you are here, especially since you’re just a junior developer.”

Jaak considered the first two weeks of his job as “one of the hardest times of my life”. It wasn’t because of the company putting pressure on him, but it was his internal struggle of being forced to learn once more. “Everything was new to me,” he said. He still applied his old skills in his work, but he also learned how to create websites using different programs.

Jaak noted that something he discovered was that, “These types of big companies are willing to pay you while you’re learning during your working hours.” That eased Jaak’s fears of getting fired and losing his value to the company. MediaMonks gave him room to grow and made him feel more comfortable in his work. ‍

To those who are working a job they don’t like doing, Jaak advised to ‘try everything’. Find a career within your skills and interests and find ways to make that dream come true. Once you land your first job, if you begin to have doubts, Jaak assures that it’s normal to have these thoughts and they will go away in time.

He also highly encouraged those thinking about joining Microverse to apply for it. Even if it won’t work out, Jaak assured that there’s no harm in trying. He said, “You’re going to end up bitter inside if you don’t try it.” ‍

“What you’re lacking in talent, you can even out with working more than other people. For me, Microverse is a dream come true. It hasn’t been easy but if you’re willing to put the work in, good things will come to you.”‍

Through a lot of hard work, focus and dedication, Jaak completed Microverse and landed a job as an international software developer. To date, Microverse has enrolled full-time students from 100+ countries in its full-time online program, and helped students from around the world land life-changing jobs. If you’re ready to change your life by becoming a professional software developer, get started below!

Ariel is the founder & CEO of Microverse, an online school for remote software developers. Read more about them & how they can benefit users properly.

Succeeding at Microverse - From Dev Zero to Professional Software Developer

Do you want a higher salary than your current local one through a career change to tech? Microverse might be the solution. I share my Microverse experience and 8 highly actionable steps to succeeding at Microverse. 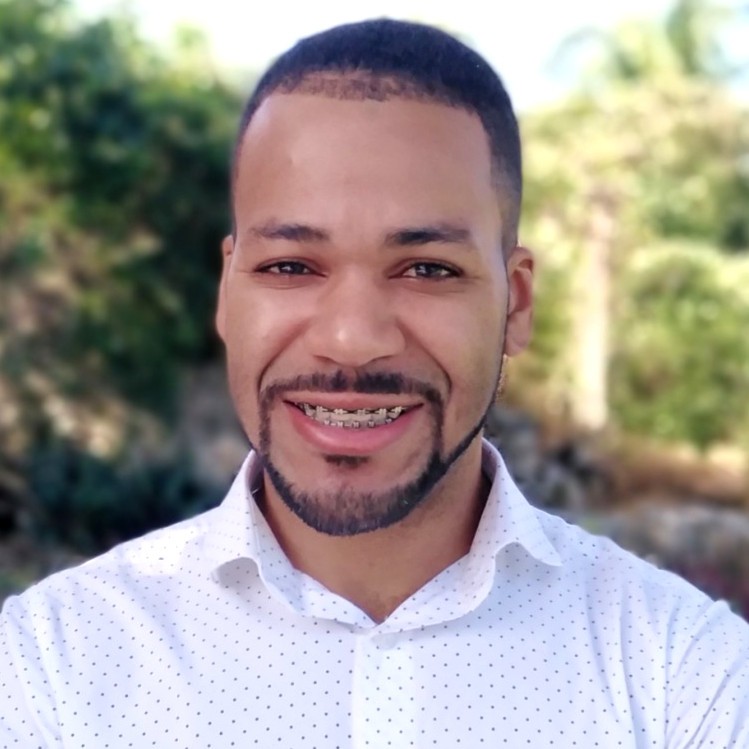 How I Became a Web Developer Without a Computer Science Degree

Follow my journey from no coding knowledge, to Microverse student, to web developer! Learn what you need to know before enrolling in Microverse's remote learning program.