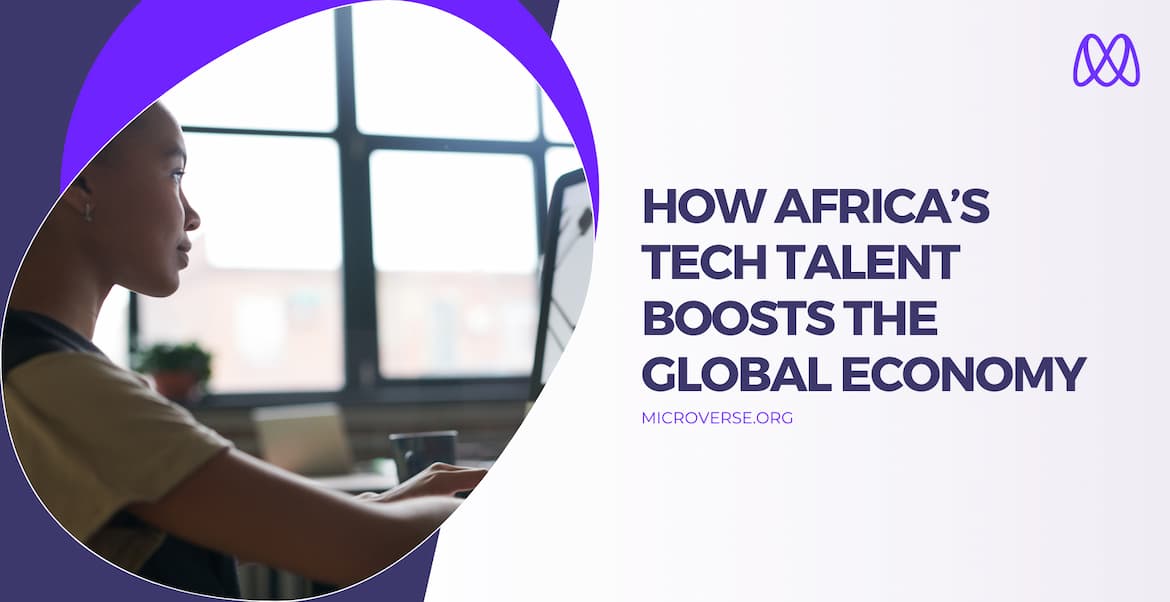 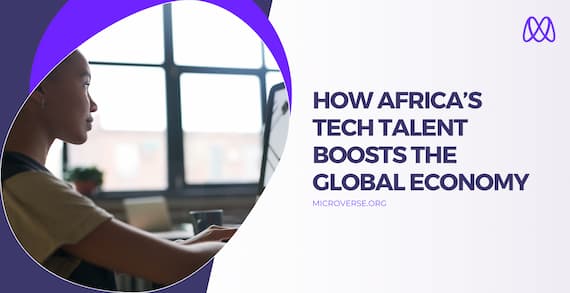 With the global economy changing due to the rise of technological adoption and advancement, it has become clear that the role of African countries and talent will be key to this structural transformation. According to a study carried out by the U.S. Chamber of Commerce this year, 93% of small business owners in the U.S. use technology to run their businesses. Businesses are integrating technology into their processes, developing new technologies and improving their software systems. This presents a unique set of challenges and opportunities as they are driven by the need to remain relevant and competitive, in a rapidly changing technological landscape.

African software developers are rising to meet this need in the U.S. and beyond, as there is a global demand for tech talent around the world. Recently, population experts have determined that the African continent has one of the fastest-growing populations and will likely contribute to more than half the increase in the global population by 2050.

It is predicted that four more countries in Africa will join Nigeria among the top 10 most populous nations globally. Africa's population isn't just growing – statistics show that 70% of the continent’s population is currently below 30 years of age. For Africa, this means that its working population is still quite young and will eventually overtake other continents with aging populations.

Knowing that there has been a recent tech awakening across Africa and that youths are more heavily invested in this change, what does this mean for the global economy? How did this move to tech hubs even start? With a spotlight on African software developers, what will their effect be on the continent, and the globe, in the long run?

How did African tech talent grow so fast?

Africa is home to a large and growing population, and as more people there gain access to technology, it will become an increasingly important market for tech. Easy access to online resources, and cultural diversity across the continent, has opened it up to much more than was available in the past.

Over the last seven years, the continent has seen a staggering increase in the number of new players in tech. This has, without a doubt, attracted the attention of international companies and Venture Capitalists (VCs). As a result, we have seen tech startups in Africa grow six times faster than the global average, and there has been a 46% increase in the number of startups that have secured funding in the region.

This growth is partly due to the work of companies like Google and Andela, who have seen the potential in the emerging youth population, and are training and equipping them with the required skills. Andela and Google’s effective executing methods have helped the youths they have trained, compete with their global counterparts.

What are the numbers backing the increase in African software developers?

Further, Egypt, Kenya, Morocco, Nigeria, and South Africa are home to more than 50% of African tech talent. South Africa has the highest number, with 121,000 developers – 2,000 more than the previous year's number. Nigeria saw the fastest growth, adding 5,000 new software developers year over year, for a total of 89,000 developers. This sharp increase is expected, as there have been a lot of tech startups blooming in the country over the past two years. Nigeria is tied in second place with Egypt, with 89,000 developers.

Further, South Africa, Nigeria, and Kenya also have a very high proficiency in English. Some African countries also speak French, so many tech companies in France and Canada also hire from Africa. Algeria and Morocco are some of the African countries with a larger French-speaking population (32 - 35%). African software developers who can speak more than one language – and effectively communicate in it – can interact more seamlessly with multinational and inclusive tech teams.

What are the top software languages and framework skills for African software developers?

African software developers across the continent are using their skills to create innovative solutions to pressing problems. Two essential skills for any developer are their knowledge of software languages and their frameworks.

According to the research carried out by our partners at Tunga, the software skills most in demand are Python, SQL, and Java. These are followed by Javascript, C++, C#, HTML/CSS, Ruby, Perl and C languages.

African developers' range of software language skills makes them some of the most sought-after programmers in the world. They are competent in these languages because they are popular and established in the tech job market.

Similarly, many African developers are familiar with most software frameworks. At the top of this is .NET, followed by Android, while others include Node.js, React.js, and Angular.

During their time learning at Microverse, the global, online school for remote software developers, students become well-versed in these skills – especially JavaScript and Ruby – and build custom applications for organizations that need software tailored to their specific needs.

Most developers are resilient, and you begin to understand how resilient they are when you hire software developers from Africa. Not only have they been able to overcome barriers frequently experienced in Africa, like infrastructure issues, but they have also trained themselves to become world-class communicators and software developers. This makes them independent, agile, and self-motivated, which is a great advantage to employers.

The tech ecosystem in Africa is proof that there will continue to be a growing population of software developers coming out of Africa. Since the start of the covid-19 pandemic, the world has leaned toward remote, hybrid work, which enables African talent to be considered globally. Further, with the development of new technologies and software not slowing down anytime soon – as more countries are adopting technology and innovating faster – African developers are an attractive asset for remote teams.

But why should companies hire African tech talent when they can also hire from the talent pool in their countries? These are some reasons why.

The tech startup ecosystem in countries worldwide is constantly churning out new tools and software. The primary role of technology in our society today is to make human life more manageable. More developers are needed to fill these new roles as tech startups are founded, and corporations are expanding, creating new job opportunities.

Solving The Global IT Talent Shortage

There is a growing demand for remote tech talent, according to Google's Africa Developer Ecosystem Report 2021. The pandemic accelerated this demand, which created more opportunities for African developers to work remotely. While the early days of the pandemic are behind us, not all working conditions have returned to how they used to be. Rather, working remotely is now part of many companies' work cultures.

The advent of the pandemic has left a lot of companies in need of skilled software developers, who do not need to be onsite to work – and it is very beneficial to get talent from countries across Africa.

Many African countries either speak French or English. The top English-speaking countries are South Africa, Nigeria, and Kenya, while Senegal and Ivory Coast speak French. This makes onboarding African tech talent much easier as there will be less communication problems between team members scattered around the globe.

One significant benefit of hiring African tech talent is that it opens the door to further developing the existing pool of software developers. Hiring from African countries leads to skillset growth and expansion as developers familiarize themselves with the new roles they are hired for. This will further improve the quality of talent, equipping them for global relevance.

In addition, African startups currently hire over half of the local developers, with 38% of the remaining workers employed by foreign companies. This shows that in the international quest for African software developers, you are not alone, and those who have hired remote developers from Africa have reaped benefits.

Needless to say, hiring from the African talent pool helps to increase employment in the area. It ensures junior developers are exposed to various scenarios to improve their skills. The increase in interest from foreign companies for software developers from Africa creates employment for developers and challenges local employers to increase pay and improve working conditions.

No matter how small or large your company is currently, if you want to continue to grow, you may eventually want to scale globally. This said, having a team located across the globe improves your product and service and opens your eyes to different perspectives. Having team members around the world, like hiring software developers from Africa, helps to gain valuable perspectives and enhance inclusion for global brands.

For employers, this means you can hire affordable junior and senior software developers from Africa, who are both technically efficient and strong global collaborators.

What are employers saying about African Developers?

Hiring tech talent from Africa has made companies stronger, more efficient, and more inclusive and diverse. Thousands of companies around the globe have benefitted from hiring remotely from the region.

Matteo Latini, Co-founder of Italy-based Nebulab, shared his thoughts on hiring Microverse alums to work remotely from countries across Africa. He said:

“The Microverse engineers we hired were great because they were fast learners and adapted to our company very fast. They came prepared and were very smart, clever and curious. Another important trait they have is they know how to do remote-first work and were not afraid of cultural differences and the tech that comes with working in a remote environment.”

Matteo has hired developers from three different African countries so far, who are all alums of Microverse.

As Africa continues to be a major destination for tech investors, with the volume of venture capital flowing into the continent tripling over the past four years, software developer openings continue to grow. Tech companies are setting up new offices across Africa and hiring local software developers to fill the available tech roles. Not only does this expansion create more jobs, but it also impacts the economy – both on a local and global scale.

Microverse offers access to many incredibly skilled web developers from Africa – and the rest of the world – who are not only educated in the most relevant web development languages but also have critical professional skills and the experience needed to excel in remote teams.

More and more opportunities are now global, and tech teams are becoming more inclusive and diverse. It will be interesting to see how the impact African software developers continue to have on the global economy over the next 10 years.

Ready to hire remote web developers from Africa? Share a few details, then get matched to exceptional tech talent from Africa here.

How Diverse Teams Are Innovating Companies in 2023

Diverse talent has never been more important and accessible for companies looking to innovate in 2023 - now might be the right time to hire junior developers from around the world.

Diverse teams drive better results. Inclusion and diversity promote productivity and innovation by bringing together a wide range of skills, talents, and perspectives.