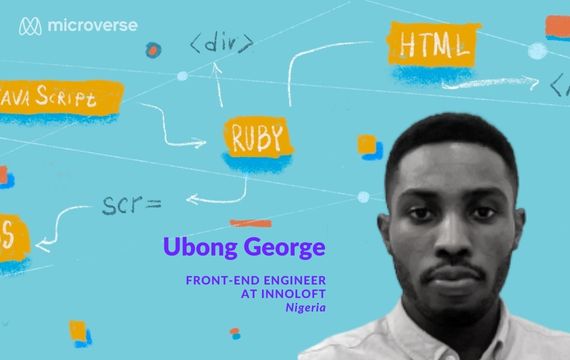 A career transition is never easy, even when you are shifting your focus to an area you are already familiar with, let alone venturing into a new path where you have no experience. But, as with any other major life decision, success depends on how willing and determined you are to push through despite all odds — just like Ubong George from Nigeria.

Ubong was born and raised in Lagos, Nigeria, a country located in West Africa. Ubong worked as an aircraft engineer for three and a half years at one of the world’s leading offshore oil and gas transportation providers. While it was more of a technical, hands-on job, Ubong was also able to get access to the software technologies behind the machinery he operated.

“I had this enthusiasm to understand what goes on behind just the physical aspect. I would say that gave me a cue to get into software development," he shared.

It was a well-paying position with good prospects, and Ubong was doing something he genuinely enjoyed. But when the pandemic came in full force, doubts began to surface.

People worldwide would agree that the pandemic brought a wave of economic uncertainty, and Ubong was not immune to this. “I had a lot of these thoughts that things might change economically,” Ubong says. “I wanted to ensure that I wouldn’t go down the drain professionally. So I thought to myself, what could I possibly do?” After taking time to consider multiple ideas, he spoke with a colleague whose wife happened to be a Microverse alum. When they got talking, she encouraged him to join Microverse, and that was it.

As Ubong discovered more about Microverse, he knew this was where he wanted to kickstart his new career. He found a sense of security when he realized that Microverse didn’t charge a penny until their students had secured well-paying jobs. “I felt like that was a good thing, because that means they must be committed to my success.”

Like many other successful Microverse alums, Ubong had no experience in coding before joining the program.

“I actually started my first lines of HTML, CSS, and JavaScript a month and a half before I applied.”

Ubong says. But he didn’t let his lack of experience intimidate him. He purchased books on HTML, CSS, and Javascript to get prepared. Ubong also took advantage of the pre-Microverse resources, like LevelUp, that are offered to applicants before joining the program. In the weeks that led to him applying and writing the challenges, he set aside a few hours every day to practice.

Ubong approached the full-time program with the same determination and commitment as he did the application coding challenges. Inevitably, he ran into a few tough moments, but the support he received from his peers at Microverse helped him to overcome the fear he felt at any point.

What eventually seemed like the most challenging part of Ubong's journey was landing a job after the program.

Going Back to the Drawing Board

After Ubong completed the the Microverse curriculum he was eager to land a great remote job. But things don’t always happen the way we want them to. Ubong sent out application after application, yet no job offer arrived.

“There was this one month where I had an interview slated for every week of the month, then I also got rejected in all those cases. It was a lot to deal with mentally.” he says.

After several other attempts with no results, Ubong realized it was best to go back to the drawing board and review his overall strategy. He decided that instead of having a distributed focus as a full-stack developer, it would be better to focus on what he really wanted to do: front-end development.

This almost felt like going back to square one because he had to go through his entire portfolio all over again. Ubong also started to explore other less common job-search mediums. “I joined some Slack channels, interacted with people, and even spoke to some alums of Microverse who already had jobs.” He also took advantage of his LinkedIn for highly filtered searches that could expose him to less obvious job opportunities.

The Right Approach to Facing Setbacks

Coming from Nigeria, Ubong also had to deal with a challenge some of his peers might not have had issues with; many western employers preferred to hire from western countries because it was simpler to process work permits and payment methods. "I remember there were three jobs where I’d gotten through the application rounds, then they just asked, ‘Where are you based?’” When Ubong said, ‘Nigeria,’ they shared that they were looking for someone in Europe. But Ubong had a friend from Argentina who had similar challenges yet was able to land a job after just a few months. So he thought to himself, “If he was able to do that, then maybe I just need to search for other opportunities.” This helped him stay motivated even when he felt like he was not progressing.

The Best of Both Worlds

The big break finally came when Ubong landed a job at Innoloft, a software company based in Germany that builds business platform infrastructure. The interview process was stress-free compared to other jobs he’d applied for, some of which had up to seven rounds of interviews.

Ubong’s life as a front-end engineer at Innoloft now involves him building features for new projects while also fixing smaller bugs. He has a supportive team he works with as well, and they have meetings daily to ensure everyone stays connected and productive.

To Ubong, working with his team members feels like another day at Microverse. He says,

“I think that the way we work within the community while at Microverse makes it so much easier when you actually get the job because we’re used to communicating with our peers with these remote work tools.”

Ubong now earns more than his previous job, with a promised compensation increase in the coming months. But the best part of Ubong’s new job is the time and flexibility it affords him.

“When I was an aircraft engineer, I had to go out very early in the morning. By 6:30 am, I’m already out, and then I come back by like 7 pm, fully exhausted and tired from doing all these physical things.” Ubong says.

“But with software engineering, it’s a lot easier cause it’s more of mental activity. I’m in my comfort zone, in my space. I also have more time to spend with family and friends. A good compensation without the time is meaningless, but I have both, and it’s been a really good thing for me.”

Learn more about the program that helped Ubong land his dream job, Microverse.

From Bartender to Front-End Developer: How Donard Tripled His Income in Less Than a Year

The story of how Donard tripled his income in less than a year going from bartender to front-end developer.

Changing your career to Software Development - 9 Steps to Getting Started Career in Coding. Here are some steps you must take to start your career in software developers: