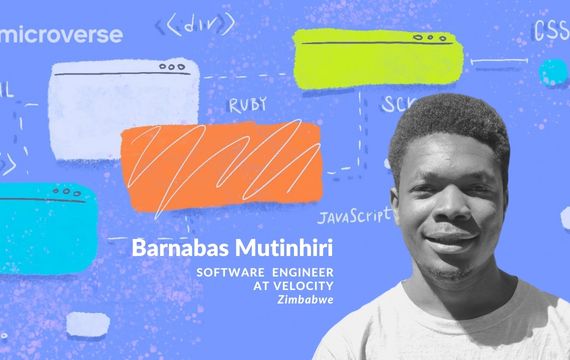 He had a goal and the drive to advance his career — all that was missing was a plan to bring his vision to life.

Barnabas graduated from university with a bachelor’s degree in business management, but it didn’t take him long to realize his true passion was software development. He boldly decided to follow his dream, and as luck would have it, he was accepted into the first company he applied to.

He worked as a software intern, assisting the senior developers while gaining knowledge as he watched what they did. With time, Barnabas got another job as a junior developer. It was more of a front-end role, as he had been learning React, but he also kept himself busy building applications on the side.

While Barnabas was making progress in his new career, he couldn’t help but feel overwhelmed at how much he still had to learn. He knew he needed a clear structure to guide him through everything he needed to know, rather than struggling to figure it all out on his own.

"I realized that for me to gain confidence as a developer, I needed somewhere to go that could give me a clear structure. With that, I could learn the whole concept of software engineering — not just writing code but also understanding how things work in the background."

A Fast-Track to Software Development Success

Barnabas began his search to find the program that could help him achieve his goal faster. After countless Google searches, he decided that Microverse was his best option out of all the offerings he came across. He studied Microverse’s curriculum and observed it was the only one that included all the skills needed to become a full-stack developer.

"The curriculum is designed in such a way that even if you have zero developer experience, you will have all the necessary information you need to be a full-stack engineer by the moment you’ve finished the program," Barnabas says.

As Barnabas progressed at Microverse, he realized that while he had a good understanding of coding, he had missed out on many basic concepts that were important to his work as a developer.

"And even the things I thought I knew before, I had to revisit them. Even if you have prior knowledge, it is important to start from the basics, and Microverse helped me realize that."

Participating in a full-time program like Microverse came with its share of challenges. Barnabas battled impostor syndrome. "Sometimes, I would just wake up and think, ‘Will I have the power to proceed tomorrow?’ ‘Will I make it to the next module?’" While he never backed down, it took him extra strength to keep going some days.

One valuable resource Barnabas took advantage of was discussions with other students. At the start of the week, they would come together and share problems they stumbled upon as they went through the program. Later in the week, they would all come back to share ideas on how to solve them.

"On Friday, everyone joins a call, and someone leads by sharing their thought process while everyone listens and gives ideas on how to improve. It was always an eye-opener for me, and we all learned a lot from those practice sessions."

Just two weeks after Barnabas completed Microverse, he got a job at Velocity, a Canadian company with a branch in Zimbabwe, where he now builds digital products across the globe.

"I have colleagues who got jobs even before they finished the program. I remember I was doing a project with a friend from Afghanistan, and he got a job by the third month of the program." Barnabas says. "He was asking me for advice on whether to continue with the program or just take the job offer. He took the job but eventually had to return to finish the program because he realized he needed the skills that Microverse offers."

For Barnabas, getting his dream job was more straightforward than he expected. He came across a job opening on LinkedIn, and ready to put his new-found skills into action, he applied and also connected with the recruiters. "I actually reached out to them, and we began talking. We had three interviews: a behavioral interview, a technical interview, and a final interview where I signed my offer."

Barnabas enjoys a hybrid work setup in his new job. While a remote work life is more appealing to some, Barnabas prefers the flexibility of being able to work from different locations. Some days, he finds himself writing code in the comfort of his home, and other days, he’s at the office in Zimbabwe, working on projects or having meetings with his colleagues.

"Sometimes, I actually prefer going to the office. But I also enjoy being able to work from home as well. And thanks to Microverse, I have a job that affords me the opportunity to do both."

Learn more about the program that helped Barnabas land his dream job, Microverse. Apply now to start your own journey!

You can see Barnabas share his journey at Microverse in a Lunch & Learn webinar here.