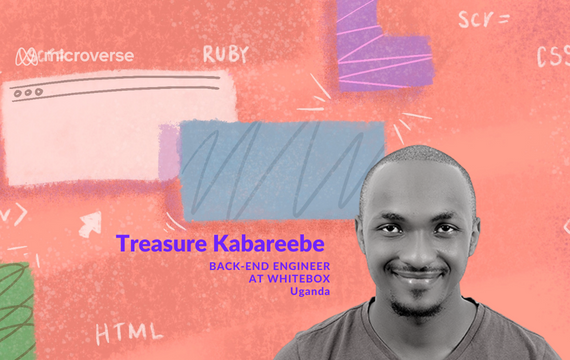 “With the experience at Microverse, we were taught the skills that we need to apply directly on the job.”

In 2016, Treasure graduated with a bachelor's degree in computer engineering. He then began working as a tech support specialist in a Ugandan school. Treasure kept busy; maintaining the school network, installing computer operating systems, and supporting teachers with their computing needs. His role was far removed from the glamor, excitement, and financial rewards he expected from a career in the tech industry.

Finding solutions to help teachers with their daily computing needs was not the challenge that Treasure was seeking.

“I wanted to make use of my tech skills or explore the tech industry a bit more. As a tech support at the school, I was working at, it wasn't that challenging or exciting anymore.”

Sometimes, life throws us curveballs, and we find ourselves wondering if we can ever move past those dark days. Treasure's journey has shown that hard work, patience, and dedication are admirable qualities. Diligence, opportunity, and commitment - these qualities pave the road toward success for anyone who dares give it a chance.

It wasn't easy for Treasure to change his career - with education requirements being expensive or out-of-reach altogether - so he was grateful when he came across Microverse.

That happened when one day a friend asked, “Have you heard of Microverse?” This friend encouraged him to explore the website and see for himself if this would be something worth pursuing –and it definitely was! Without hesitation, Treasure believed this was the right choice for him; both because there were no upfront fees and because they guaranteed his success if he put in enough effort. In Treasure's words,

“When I looked at the Microverse website, I saw the guarantees that they were giving. You study for free, and you pay only after you've acquired a job. To me, that was the exact thing I was looking for.”

Treasure’s previous learning would help, but he now found himself immersed in the wonderful world of Microverse. A world of unlimited opportunities. And where every day is transformative.

“I remember being amazed. The entire idea of their programming was new. The software development tools – I hadn't appreciated how great the tools were for all developers."

Treasure still remembers the exciting possibilities before him and now had the resources and training to highlight his skills and raise him above the crowd.

“Microverse gave me a level of independence as a professional. At Microverse, you're going to work on coding challenges, and that is the standard for all interviews. You're going to get some technical questions and some challenges to work on. So the fact that you go through that with Microverse is a good thing, a big plus to Microverse.”

Now he realizes these standards prepared him to be a step ahead of his competition – they gave him an edge mentally and professionally.

Now he realizes these standards prepared him to be a step ahead of his competition; they gave him an edge mentally and professionally.

The Trials and Tribulations

It was the strong support at Microverse that helped Treasure achieve his dreams. Unfortunately, although his journey was remarkable, it wasn’t without trials and tribulations. Treasure remembers the struggle to find work was ‘exhausting,’ having submitted hundreds of job applications, he wondered if there would ever be a breakthrough. Then, Treasure was rewarded with his dream job.

He recalls, “I applied for many jobs. I was rejected many times. I think to some extent, and even the rejections were better than those applications where you were ghosted, where you don't get any response.”

Treasure remains thankful for all the support that he got from Microverse. He remembers the problems associated with launching his successful tech industry career.

“I mentioned my worries to Microverse, and the eagerness with which they encouraged me to join and work with a career coach was very, very exciting. It's not like ‘just apply and relax’. You're always getting feedback from the career coach. Having Microverse on your side when you need to switch roles, I think it is not something that you need to worry about.”

Landing his current role at Whitebox was an outstanding achievement for Treasure. It has allowed him to reflect on the many benefits that he gained studying with Microverse. He is quick to remind people that anyone, anywhere can study with Microverse. Anyone can complete the same remarkable journey that took him to a career in the fintech industry.

“Looking at the coding challenges and the pre-course materials that were provided, they are targeted to most people. You don't have to have the background I had.”

People anywhere in the world can enter the tech industry and begin a successful career with the support and learning at Microverse.

Treasure is now living the dream that he once had – a fulfilling, challenging, and well-rewarded remote job in the tech industry.

“At Whitebox, we manage your digital wealth. I have to say that these first few months, I've learned a lot about investments and stocks. Yeah, it’s an exciting industry.”

You can hear the joy and excitement in Treasure's voice as he shared more about his role as a back-end engineer at Whitebox.

Treasure’s initial concerns about launching a successful tech industry career from Uganda have all but disappeared. He now enjoys all the positives of remote working and sees very few downsides in his new lifestyle.

“I have to say that after moving to remote work, I don't think I could go back to commuting. Studying with Microverse, I built a work ethic that makes it easy for me to be more productive in a remote environment. In my current role, I'm working 100% remotely.”

Treasure learned a multitude of skills through his time at Microverse:

The skill to communicate across teams and when paired with other developers.

Treasure’s journey is intertwined with the support and learning he gained from Microverse. It is hard to identify where the progress began. Treasure brought a unique set of skills – effort, commitment, determination, and compassion.

Treasure's success was achieved by combining his skills with the unique program and resources of Microverse. As Treasure sums it up,

“Microverse showed me that I can commit to something and follow through. It is something that I really hadn't had any experience with before. They tested me. They pushed me over such a long period of time.”

There is no doubt that combining a dedicated student with the tools and teaching of Microverse can lead to success as an international developer.

Due to the great friendships formed and mentoring that he received at Microverse, Treasure now provides mentoring to other Microverse students.

“I've been mentoring other students to try to help with career changes, to take away the pain or challenges they face while they're trying to get into the software industry.”

Want to launch a successful tech career and work in the international software industry? Begin your journey with Microverse today to land your dream job next year. Apply now!