From Bartender to Front-End Developer: How Donard Tripled His Income in Less Than a Year 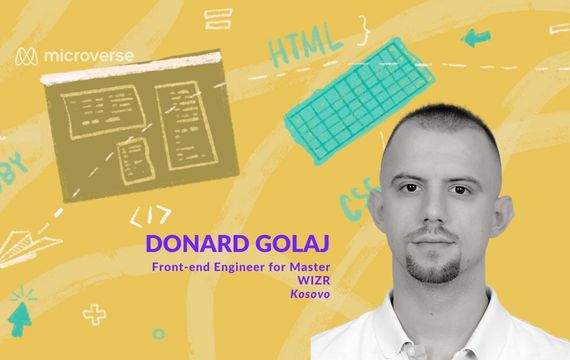 Microverse alum, Donard Golaj never imagined his life could change so much in one year. Today, he works remotely as a front-end engineer at Master WiZR, a leading Norwegian tech company, making three times his previous income. But this wasn’t always the case.

Less than a year ago, Donard was a bartender in his home country of Kosovo, working long hours yet barely earning enough to make ends meet. He had started a college degree in physics but had to drop out after his first year to get a job. Donard worked as a bartender for seven years, but the entire time, there was a yearning in him for more. As he served drinks and attended to customers, he knew this was not the life he envisioned for himself.

Donard was interested in marketing and decided to start a career in that field. He told his cousin—who he regularly visited on weekends—that he planned on taking a course in marketing. Donard moved to Pristina, where his cousin was living, and set out to begin his new career path.

But before he could proceed, everything changed.

The Suggestion That Launched His Career

Without warning, the COVID-19 pandemic sprang out worldwide, and everywhere was shut down. Donard had to leave his job by 7 pm due to a curfew, and he now had a lot of free time on his hands.

One day, his uncle offered a suggestion. "Why don’t you try your hand at HTML and CSS? You don’t have to continue if you don’t like it". This was the beginning of Donard’s journey as a software developer.

Donard started self-learning alongside his uncle and took two courses on basic HTML, CSS, and a little Javascript. Though he was learning and making progress with the courses, he wished to have a community that could keep him accountable for his coding journey.

"I needed something—or somebody—to keep me on a straight line without getting distracted."

Shortly before he finished the second online coding course, he met someone who happened to be the sister of a Microverse alum. When she told him about Microverse, he knew this was exactly what he was looking for.

Finding A Community Within Microverse

Eager to know more, Donard looked up Microverse’s website to get more information about their full-time program. He applied and got to work. When he was accepted, he told his family about his decision, and they agreed to support him throughout that period so he could entirely focus on learning.

Microverse introduced him to a whole new world. By interacting with so many people from various parts of the world, Donard started to learn the importance of diversity in the workplace.

"I met people from other cultures and countries, and now I have many friends all over the world. If you work in such a diverse environment, you’re going to start judging less".

To him, the best part about Microverse was the accountability that came with the program. Because he had coding partners to keep him accountable and a deadline to submit his work every week, he was more determined to go through with it.

"Microverse is all about collaboration. In my team, we were always on calls helping each other, If anyone had a bug, we were there to help out." Donard says.

His determination to succeed kept him going week after week as he moved forward in the program – until tragedy struck. Donard fell sick and needed to undergo an operation.

Pushing Through Against The Odds

Donard’s operation made it hard for him to stand or even sit, confining him to bed for two whole months. "It was the hardest part of the whole experience," he says. "I finished Ruby Rails in bed. I didn’t know I could do that, but I did, and I’m really proud of myself for that".

Donard didn’t let his medical condition derail him, and with enough support from his coding partners, he was able to push through with the program and complete the last module.

But this was just the first milestone. It was time to face the next challenge: getting a full-time remote job.

Barely a week after Donard completed the technical curriculum, he received a LinkedIn message from a startup founder who had viewed his profile. When she told him about a project she needed his assistance with, he happily accepted the offer without pay. He shared, "Most companies want you to have experience, so if you have to get experience without being paid, go for it."

Donard worked at his new job at Juubix, for three and a half months and then started to apply to other openings, but didn’t get responses. "I applied to nearly 150 companies, but didn’t get a single offer. It was demoralizing, and I was losing hope as the days went by".

A Breakthrough At Last!

Out of frustration, Donard decided to express his thoughts to his LinkedIn network. He put up a post talking respectfully but constructively, about how companies were unwilling to hire applicants who lacked relevant experience, yet applicants needed jobs to gain that experience. The post went viral, and to his surprise, four companies reached out to him, one of which eventually sent him a job offer.

Donard had a series of three interviews and a test project before he got the offer from Master WiZR. The whole process took eight days. Donard’s dreams were finally coming true, and he couldn’t be happier.

"I’ll never forget how I felt when I just got the contract. I was so happy knowing I could finally support my family and afford everything I needed.”

Donard says. "When I shared the news on LinkedIn and Instagram, my phone blew up with congratulatory messages."

He now works remotely as a front-end developer at Master WiZR, earning three times his previous income from just 10 months ago. Donard likens the work environment of his current company to that of Microverse.

"I work with a good team that’s very supportive. I love that I was really prepared for this. Microverse prepares you to be fully serious and professional. If you can be serious and work hard, you will be a developer in 10 months. I can say that my life has changed so much in the past year."

Donard still keeps in touch with his peers from Microverse. "We all finished the program on time, and now most of us have jobs." He says. "We catch up once a month, just to keep that friendship we had while in the program."

Learn more about the program that helped Donard land his dream job, Microverse!

You can see Donard Golaj share his journey at Microverse in a Lunch & Learn Webinar here.

Changing your career to Software Development - 9 Steps to Getting Started Career in Coding. Here are some steps you must take to start your career in software developers: